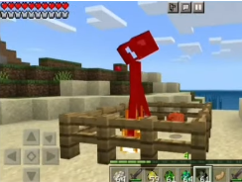 markus
13:58, 21 July 2021
82
0
Here it is; the sequel to Merging Items! This mod adds new Mobs/Items and some of them are pretty cool and some of them have unique powers. You guys wanted it, so i made it! (Also, put your ideas in the comments below!)

-----------------------------------
Magma Rabbit/Magma Foot (Magma Cube + Rabbit) - This Rabbit is immune to fire & even lava! It is hostile towards the Player and gets harmed when it hops into water. The Magma Rabbit has a chance to drop a Rabbit Foot & Magma Cream! When you merge the drops together, it gives you a Magma Foot! When you eat it, it gives you Fire Resistance, Village Hero and Saturation.
Creepermite/Gunpearl (Endermite + Creeper) - As the rarest mob in the game, the Creepermite has a 3.2% chance of spawning. It shoots Fire Charges at Players and Endermen. When it dies, it drops Gunpowder & Ender Pearls which can be merged to make the Gunpearl and that explodes the second it gets thrown so i suggest you rename the item and give it to your friends to troll them! 😂
Zombified Enderman/Enderman Head (Zombie + Enderman) - This Mob burns in daylight and hates water, so you might stand a chance against it! It hates Endermites & Creepermites just like the normal Endermen. It is almost as rare as it's rival, the Creepermite as it spawns 4.6% of the time! It drops a Zombie Head and an Eye Of Ender on death and they can merge into an Enderman head, which is placeable.
Wandering Phantom/Phantom Potion (Phantom + Trader) - There is a Phantom hiding in a Trader Jumper! That's because the Phantom killed the Wandering Trader and took his place. This mob summons 2 Phantoms when it spawns into your Minecraft world, just like the Wandering Trader has 2 Llamas! You can trade with it if you have Phantom Membranes and can get a Phantom Potion, Elytras and Nautilus Shells. It drops a Phantom Membrane and a Water Bottle when it dies and they can merge into a Phantom Potion, which gives you Levitation and Slow-Falling when you drink it!

----------------------------------
Hammerhead Shark/Hammer (Drowned & Guardian) - I made it's own model too! It naturally spawns in the Warm Ocean Biome and drops Iron Pickaxes and Flint, which when merged, makes a Hammer! It gives you Mining Fatigue & Slowness but it deals 16 Attack Damage!
Blazemite/Ender Rod (Endermite & Blaze) - This acts like a Blaze as it shoots fireballs which is crazy! It doesn't spawn naturally and drops Ender Pearls and Blaze Rods which make an End"ER" Rod, not an End Rod. However, it can craft into one as now, putting a Stone Pressure Plate & an Ender Rod makes an End Rod!
Waxolotif/Powerful Tropical Fish (Axolotl & Wolf) - As well as having an Axolotl Costume on it, the Waxolotif can not be tamed (for now!) It does attack hostile mobs though! It can drop Tropical Fish and Bones which can merge to make the Powerful Tropical Fish, which gives you all the good effects in the game!
Iceologer/Ice Chunk (Vindicator & Snow Golem) - This illager has an axe like a Vindicator but you'll soon find out that it drops Snow Layers and Ice Blocks! If you get 3 Ice and 3 Layers, you can make an Ice Chunk, which gives whatever it hits, Slowness because it is so cold.
If you want to find out more about this mod, watch this: