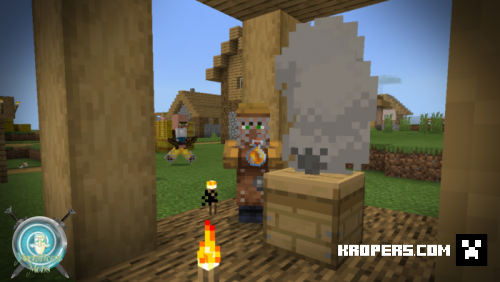 markus
10:20, 18 July 2021
101
0
Hi, I'm ALEXYSSSJ4, again (after a long time) bringing my latest and greatest add-on project Magnificents mobs. What is this add-on project about to begin with? Well, it is an add-on that I have been developing for more than a year with some friends and fellow developers (Abel 177575, Ankor the Furnace and Ronnie Mcdee and with the help of some contributors Man of pros, Baltz and Taro!) This project seeks to improve all aspects of minecraft vanilla (from the side of mobs and items) and also add new and complementary all with a reason to exist and a use

New mobs!
New Villagers :
-beekeeper, works with the hive block, he creates his own little house where he works, at noon he goes to the center of the village to reign with the other villagers for a while, at night he looks for the closest bed to sleep (but it's still in beta).

-special villagers
-Hunter, hunting any wild life he sees with his wolf. (If you want to keep him away from your farms, let them be made of fences and he will know to let him get away)
-Freighter, only can get he when you givin to niwit villager a chest and for hired he give a 1 emerald block (and have moves, with bell to pick up items in the floor and stray in villages and compass to follow you)
-Lumberjack, he seeks trees for cut bur for his job and breaks them for goods, and replant them again. (Be careful with wooden buildings, use a fence, torch or lantern to prevent him from breaking your house!) at noon he goes to the center of the village to reign with the other villagers for a while, at night he looks for the closest bed to sleep (but it's still in beta).

-The OG Valhalla guards with various improvements!
(original add-on) https://mcpedl.com/valhalla-guards/
(note: now everyone can only be hired with an emerald block)
-Lord, The head of the village, in each village there is always one, have a boss bar and he is a very strong ally, he attacks his enemies according to the distance (he uses a sword for the melee and a trident for the distance) when attacked by many enemies it can emit a roar
You cannot tame or tie it up and it can only be found if that lord was named that way by you (it is done with a nether star)
-Crossbowman, now you can give him a fireworks and he will use it to perform an area attack
-knight, now his shield does protect a little of projectiles, explosions and some melee
-Mage, new texture and now his invocations are according to the biome he is in, and can grab totems in the ground
-Healer, now clears bad effects and gives regeneration when doing so (and healing villager zombies will render them immobile in order to avoid they kill him)
New guards:
(In this image we see the alchemist, shieldman and the warrior texture in this image was only available during add-on testing, now is a new)
-Shieldman with it's shield, defending his teammates!
-Alchemist, Villager-Side Witch, harass their enemies and boost the team with magic! (but it's still in beta)
-Warrior, it's basically the brute version in the villagers, use a very strong melee attack (the strongest of all the guards) fast and has a large amount of life, but since he cannot wear armor his resistance is lower than a guard with diamond armor or netherite

New Illagers!
(In the image you can see the variant of the ravager "the illager", also the new texture of the pillager in a melee variant and two of the new illagers, the healer illager and the illusionist)
(In this other image you can see the new texture of the summoner in addition to his totem in his hand, also the new texture of the witch and the new mini-boss illager, the necromancer)
-Necromancer, a mini boss with ability to call the dead to fulfill his intentions and always carries his trusty Totem of Undying, has 3 phases, can spawn in raids, 7th orde of hard mode
-Hillena, bound by corruption and evil intentions, the hyena joined the Illagers against the Villagers. (sometimes it appears tied next to a pillager who is its owner)
-Illusioner, a misleading mob, it can call clones and does various tricks to disconcert you (like giving you blindness, nausea or a new effect the false bad omen, it can also make false sounds, like explosions, villagers being injured, and less likely a wither or a dragon roars (can spawn in raids 5th and 7th orde)
- healer illager, he is a healer of the illagers, there is not much special about him, he heals other illagers; adjustments may be made in the future (can spawn in raids 3th, 5th and 7th orde)
New Invocations!
-Soullager, a new friendly vex-like. (invocations of the mage in plains or others biomes)
-Fireling, by hot biomes, capable of burning their prey or shoot fireball from distance, normal fire and soul fire variant. Not Cool! (invocations of the mage in desserts, nether wastes and soulsand valleys)
-Wood agent, small wooden golem, they have various appearance depend on its biome.
(invocations of the mage in forest, roofed forest and birch forest)
-Lumberwolf, great wolf of wood, wood agents can ride it and hunt enemy as an ally! (invocations of the mage in taiga)
-Sand shark, new danger that lurks in the ocean and beaches. Gotta love next Summer vacation! (invocations of the mage in beaches and ocean)
-Lifyfin a cute little mob with a lilypad on it's head. Sure everyone loves cute things!  (invocations of the mage in swanps)
-Snowing, by cold biomes invocation, capable of freezing prey or throwing snowballs at it from a distance (these snowballs hurt) No heat! (invocations of the mage in cold biomes like glacial and snowy plains)
-Fallen knights new undead mobs, 4 variants, player, piglin, villager and illager (invocations of the necromancer)
-Lost soul, new undead mobs like the vex, natives from the soulsand valley and invocations of the necromancer
-Great tusk, it is a great stalagmite of bone and soul sand, which causes a little serious damage and throws its enemies highly into the air (invocations of the necromancer)
-clone illager strong, invoked in small numbers, follow its creator or other illagers for support (invocations of the illusioner)
-false illager weak, invoked in large numbers, has an interchangeable attack sometimes they attack one and other times others (it is to distract) they die of a blow (invocations of the illusioner)
New Animals!
-Snake, aggressive reptile which have deadly attack with its fatal poison, spawn in various biomes like forest, savannas and desserts. (two variants skins from biome)
-Hyena, neutral animal, behaves similarly like the new wolf, spawn in savannas and desserts (but it's still in beta and model broken…).
-Dogs, new various different variants and they can sleep with you like cats! (spawn in villages)
-Big beetle/Rhino beetle, neutral mob of forest and savannas, can be tamed with apples and can be ride with saddle and carrot and stick!
-Camel, semi-neutral mobs of desserts, two variants, can be controlled with stick with carrot and put a chest after tame, like llamas follow caravans!
-Chouris, new neutral and ambient mob from the end, similar to jelly fish or a ballon, they are of various sizes, you can pick up the smalls ones with a bucket (but be careful, if you hit it it can paralyze you) when the big ones dies he releases slime balls or he can generate 2 smalls chouris.
(the logo in this picture is the original one, we will adjust it later)
-Flamoths, new neutral mobs (3 variants) from the nether, they feed and spawn according to biome (and have baby variants the flamelarvas, that you can tame)
-Zombie pig, a new undead and neutral mob, spawn when a pig is shocked by lighting bolt (They have 16 life and can be re-tamed, but only if they were tamed before turning zombie, they are given golden carrots, when tamed they will defend you)
-Ravens, neutral mobs, can steal your crops, but you can tame with rotten flesh, bread or spider eyes, They ride on your shoulders, they can heal and reproduce (they ravens are in beta and not can spawn for nor)
Traders
-New wandering trader, sell new things and he can defend (replaces to original), now also to its llama it can also have camels (note: the texture of the decoration is not yet visible for some rare reason) and he coming with new friends (traders and items to trades in beta)
-New illager trader, friend of others traders, he sell thing for the battle, he goes together with a pet the trader ravager
-New piglin trader, Immune to zombification, thanks to a new food that he consumed, the golden fungus, friend of others traders, he sell nether things and new ítem the golden fungus (and its blocks), he goes together with a pet the hoglin trader (which is also immune)
- trained hoglin, there are 2 variants, for now there is only has a pet variant of the piglin trader (Immune to zombification, thanks to a new food that he consumed the golden fungus)
(the image from them is seen on the feature image)

New items
-The golden fungus (new food and block) it the future can use this for tame baby piglins and baby hoglins
-Slime bucket
-Chouris bucket
*They can also be seen in the creative tab, the fungus where the other fungi are and the buckets in the last part of the tab where the fish buckets are*

New blocks
-Golden fungus wood, stem and hyphae
*They can’t also be seen in the creative tab*
To get this blocks use /function gold_fungus