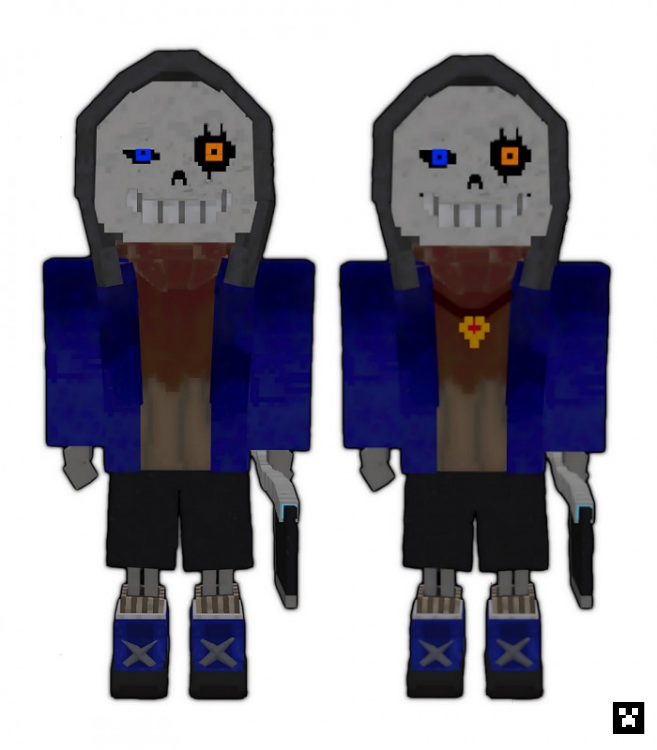 markus
21:08, 17 July 2021
110
0
Already tired of the monotonous additions of Undertale, I present to you Infected Sans + Axetale Sans- The first exists only for destruction, the second only for its own survival.

History:
There is nothing left of Sans skeleton but his famous grin.
Inside Sansa's shattered skull shines a testament to his insanity, his separated mind; his magic divided, Justice and Patience. His traps were the kind that you never want to run into, because there is no way out of them, and they did something worse than killing you ... they kept you alive. They drew the last measure of despair from you while you waited for its creator to find you.
Stade-1
HP:500
ATK:5
Stade-2 [Give "Heart"]
HP:∞
ATK:≈5-15
Arsenal
Bones
Gaster Blaster
Frisk Soul (Sans-Stade 2)
Items:
Heart
Trap
Infected Sans
Appearance:
He looks like Sans Horrortale, only he has a bandage on his skull. His right eye is completely white with a black outline, while his left eye is black. His ax is covered in blood. He wears red sneakers and black sweatpants with a thick white vertical stripe on each leg. He has a large bloody wound in the middle of his chest and white fluff on the hood.
Naturally, this character is close to the title of God, but not entirely.
HP:
Almost invulnerable
Attack:
Very big
Reincarnation:
Transforms into a Black Being (The chance is greater if you try to get rid of Infected Sans.)
Vitality:
Hard to get rid of
Black Being
Other possibilities:
•Bone Attack
•Gaster Blaster Attack
•Bone Soul
Bones
Gaster Blaster
Soul
Trailer: