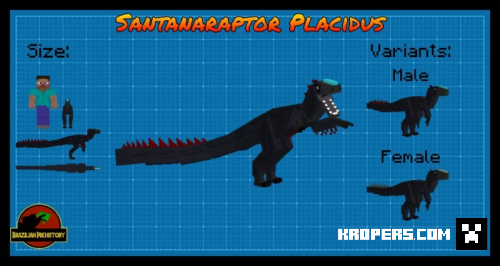 markus
20:41, 17 July 2021
92
0
This addon was made to honor Brazilian prehistoric dinosaurs and animals that are undervalued and trafficked out of our country...
This is the 1st version of the addon, more creatures and dinosaurs will be added in the future with updates, in the final version the addon will have approximately 50 species.

V.1.0 NOTE:
This is the first version of the addon, any bugs report to the creator on the discord server.

Survive in a world with 12 different prehistoric species, search for dinosaur eggs or baby mammals, and build your own park with your tamed creatures!

Ubirajara jubatus
A small compsognathid with long feather-like structures protruding from its shoulders, hunts small animals such as chickens and rabbits, only attacks when disturbed.
HP: 5
ATK: 1
DIET: Carnivore

Mirischia assimetrica
Also from the compsognathus family, this feathered forest hunter wanders around in search of small prey that he and his band can shoot down, only attacking if disturbed.
HP: 5
ATK: 1
DIET: Carnivore

Amazonsaurus maranhensis
A huge sauropod of the Diplodocus family that walks alone or in groups across the vast plains, it is a docile animal but becomes extremely aggressive if disturbed.
HP: 100
ATK: 50
DIET: Herbivore

Provelosaurus brasiliensis
A pareiasaur that lived in the Permian before the Permian-Triassic extinction, wanders through the dryness of badland desert biomes in search of water and a few leaves to feed on, are defensive but pose no danger.
HP: 20
ATK: 8
DIET: Herbivore

Pampaphoneus biccai
This dinocephale lived in the Permian, has characteristics of both reptiles and mammals, but its lineage was extinct at the beginning of the Triassic period, it hunts Provelosaurus in badland biomes, it is an excellent hunter and very dangerous!
HP: 25
ATK: 15
DIET: Carnivore

Smilodon Populator
Commonly known as the saber tooth tiger, the smilodon is one of the most iconic representatives of the Cenozoic mammals, it hunts other large animals in the savannas, very dangerous!
HP: 30
ATK: 15
DIET: Carnivore

Paraphysornis brasiliensis
The terror of the jungles! A fast, agile and intelligent animal, the Paraphysornis is the only representative of the Cenozoic terror birds known in Brazil, with its strong legs and its long beak they hunt in groups in the taigas and jungles, extremely dangerous!
HP: 20
ATK: 10
DIET: Carnivore

Thanos simonattoi
Abelisaurids were the dominant predators in Africa and South America in the Cretaceous period, and Thanos was one of them, named after the character Thanos from "The Avengers", he is very aggressive and hunts his prey alone or in small groups  in the jungles!
HP: 30
ATK: 20
DIET: Carnivore

Dromaeosaurid
Maranhão was an oasis in the middle of a large desert Brazil in the Mesozoic era, that's why several groups of animals and dinosaurs lived there, one of them was the terrible dromeosaurids, better known as raptors, their fossils found are not enough to determine their species  , however we know that they lived around here due to a few traces, they are extremely fast, agile and aggressive, they hunt in groups.
HP: 25
ATK: 15
DIET: Carnivore

Spectrovenator ragei
The meaning of his name is ghost hunter, and that's exactly what he is, with his camouflage he becomes imperceptible in taigas and forests, and so the spectrovenator, a small abelisaurid surprises its prey without giving it any chance to defend itself!  extremely aggressive, hunting alone or in groups.
HP: 25
ATK: 15
DIET: Carnivore

Oxalaia Quilombensis
The biggest carnivore predator to ever set foot on Brazilian soil, this huge dinosaur is a spinosaur that lives alone or in double knots in swamps, prefers fish but no other carnivore has the courage to fight the swamp emperor!  He is extremely aggressive with anyone who invades his territory!
HP: 50
ATK: 20
DIET: Carnivore

CREATURE EGGS:
Some creatures like reptiles and birds in the addon lay eggs, and you can get them to make your own zoo!
All animals in the addon can be tamed, but only if they are babies, adults can only be fed to reproduce, to tame babies just feed them meat or plants depending on their diet!
With tamed animals you can build enclosures and put them inside, building a beautiful zoo of Brazilian prehistoric animals!