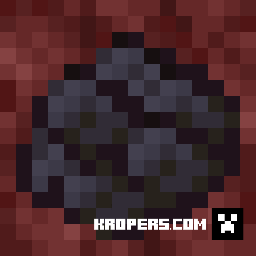 markus
20:12, 14 July 2021
123
0
A very simple Add-on that adds one single item, a rock. Yes a rock, a very simple item that is used to get out of a scrape. This rock allows you to mine stone a little quicker than by hand to help you dig yourself out of a deep cave.

With the simple crafting recipe of one stone variant, the rock is only useful when you've got no resources to craft a pickaxe inside a deep cave or any hole. Mining a little bit slower than the wooden pickaxe, the rock is the slowest "pickaxe" in the game alongside the lowest durability out of all tools. The rock is not meant to replace the wooden pickaxe as such pickaxe is needed to get stone in the first place.

It's as simple as it can be! A single stone variant and you've got everything you need.

The rock has a fair bit of blocks it can help you smash through, the following can be seen below.

The rock has 21 durability, nothing that'd last you a lifetime.

You really love your rock? Well you can repair it if you really want to... This also goes for all variants with their respective stone type healing 20 durability.

Wanna make the ultimate rock? Enchanting is also possible with the rock, they have the same enchantment set as pickaxes.

I have plans for 1 more update of this Add-On since we have 1.17 coming out, this update will add support for the new blocks in 1.17 alongside new rocks like the Deepslate Rock! I'm willing to hear your guy's thoughts for new rocks & other suggestions to come out with V.3 in the next few days.

Closure
Make sure to have the settings in the image below enabled for the best experience.
Supported Minecraft versions